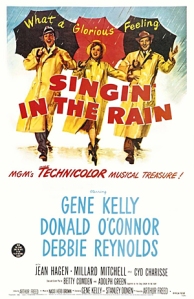 “Singin’ in the Rain”

The 1952 musical comedy starring Gene Kelly, Donald O’Connor and Debbie Reynolds. The movie tells the story of Hollywood in the late ’20s, with the three stars portraying performers caught up in the transition from silent films to “talkies.”

The film was only a modest hit when first released, with only O’Connor’s Musical Lead Actor win at the Golden globes. However, it was accorded its legendary status by contemporary critics. It is now frequently regarded as one of the best musicals ever made.